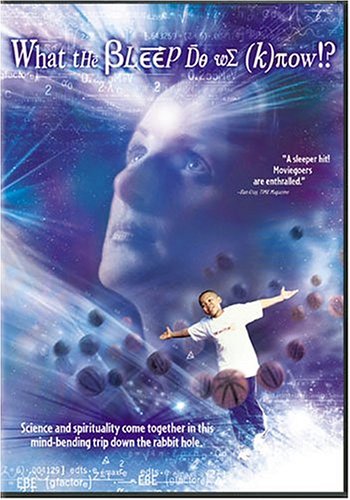 What the Bleep Do We Know!?

WHAT THE BLEEP DO WE KNOW?! is a new type of film. It is part documentary, part story, and part elaborate and inspiring visual effects and animations. The protagonist, Amanda, played by Marlee Matlin, finds herself in a fantastic Alice in Wonderland experience when her daily, uninspired life literally begins to unravel, revealing the uncertain world of the quantum field hidden behind what we consider to be our normal, waking reality. She is literally plunged into a swirl of chaotic occurrences, while the characters she encounters on this odyssey reveal the deeper, hidden knowledge she doesn?t even realize she has asked for. Like every hero, Amanda is thrown into crisis, questioning the fundamental premises of her life ? that the reality she has believed in about how men are, how relationships with others should be, and how her emotions are affecting her work isn?t reality at all!The unlikeliest cult hit of 2004 was What the (Bleep) Do We Know?, a lecture on mysticism and science mixed into a sort-of narrative. Marlee Matlin stars in the dramatic thread, about a sourpuss photographer who begins to question her perceptions. Interviews with quantum physics experts and New Age authors are cut into this story, offering a vaguely convincing (and certainly mind-provoking) theory about… well, actually, it sounds a lot like the Power of Positive Thinking, when you get down to it. Talking heads (not identified until film’s end) include JZ Knight, who appears in the movie channeling Ramtha, the ancient sage she claims communicates through her (other speakers are also associated with Knight’s organization). What she says actually makes pretty good common sense–Ramtha’s wiggier notions are not included–and would be easy to accept were it not being credited to a 35,000-year-old mystic from Atlantis. –Robert Horton