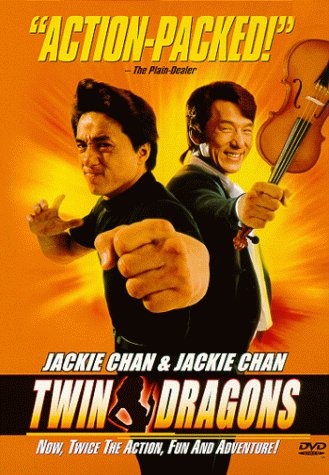 The world’s greatest action hero, Jackie Chan (RUSH HOUR 1&2, RUMBLE IN THE BRONX), delivers twice the excitement and twice the fun in this nonstop, stunt-filled comedy thriller! Jackie plays Boomer, a streetwise martial arts expert living in Hong Kong and his long-lost twin brother, John, a classical musician from New York! They’ve never met … but when John travels to Hong Kong to give a concert, these total-opposite identical brothers become unwittingly mixed up in a hilarious case of mistaken identity! With hard-hitting martial arts thrills and endless comedy hijinks, TWIN DRAGONS packs everything you’ve come to love about the wildly popular movies of stuntmaster Jackie Chan.Jackie Chan resurrects the old Corsican Brothers chestnut of identical twin brothers separated at birth who meet up as adults and discover that they share more than blood ties. Poor boy Chan is a mechanic and race-car driver whose black-market activities have made him the target of some nasty mobsters, while jet-setting Chan is a world-famous conductor back in Hong Kong for a concert. In the same vicinity for the first time in years, they can suddenly feel each other’s pain, and more. As one Chan jumps a jet boat for a wild escape, the other becomes a spastic victim of the furious ride, thrown around a posh restaurant while drenching his date with drinking water. Though the American cut has been pared of the worst of Chan’s incessant mugging (it’s about 12 minutes shorter than the original version), it’s still overloaded with silly slapstick and cartoonish mistaken-identity gags as the boys swap girlfriends and dance. But wade through the crude comedy and you’re rewarded with a gymnastic free-for-all climax in a car-testing workshop, where Chan leaps over, under, and through cars while taking on an army of gangsters before split-screen brothers team up for a bit of marionette martial arts. Tsui Hark and Ringo Lam codirect, Tsui taking the comedy and Lam handling the action, and John Woo makes a cameo as a priest in the wedding finale. –Sean Axmaker