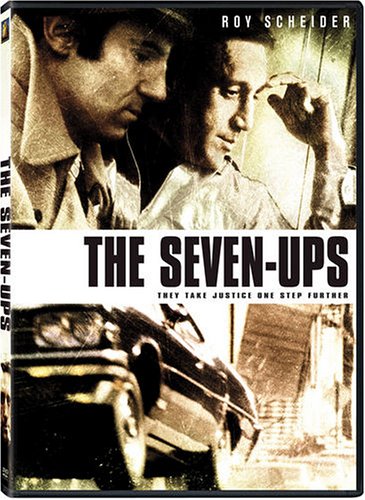 Seven-ups are those criminals due to serve at least that number of year in jail — if they get caught. Roy Scheider is a cop who catches them.The Seven-Ups of the title are a hot-dogging special unit of the New York Police Department led by street smart Roy Scheider, who applies unconventional techniques to crack tough cases and nab untouchable criminals. When a pair of police impersonators pulls a series of mob kidnappings, the local hoods get very nervous and Scheider’s boys investigate, leading to a squad member’s death that turns the case personal. Director Philip D’Antoni previously produced Bullitt and The French Connection and learned the importance of a good car chase: with craftsmanlike efficiency he delivers a textbook example of the inner-city chase, lacking style but chock full of squealing tires, careening cars, fleeing pedestrians, and dynamite crackups. The New York City street shooting and the ever-present street sounds give the film a solid sense of place, and Scheider applies his usual thoughtful intensity as the vengeful cop, but the rest of the cops are woefully undeveloped. Only Tony LoBianco, as Scheider’s childhood buddy turned hustler and street snitch, has any real presence next to Scheider. In the pantheon of ’70s cop thrillers, The Seven-Ups ranks below the more vigorous and ambiguous classics like Serpico and The French Connection, but excellent stunt work and gritty action raises it above the pack. –Sean Axmaker