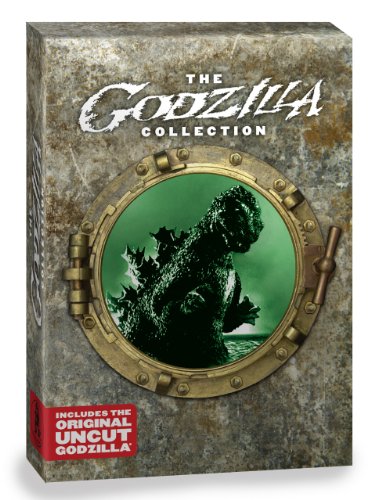 The Godzilla Collection (Vol 1 and 2)

Gojira / Godzilla, King of the Monsters

The first of the Godzilla movies, and the most somber and serious in tone, Gojiro was originally a 98-minute Japanese horror film, until a U.S. company bought the rights and reissued the film at 79 minutes, replacing sequences involving a Japanese reporter with new inserts of a dour, pipe-smoking Raymond Burr. Both versions appear together for the first time in this release from Sony Wonder.

Godzilla is back, and this time he’s not alone! Godzilla and the spiny monster Anguirus are in a heated battle on a small Japanese island. As the threat of destruction mounts, two Japanese heroes muster their courage for the final showdown with Godzilla.

After a fierce typhoon, Mothra’s gigantic egg washes ashore Japan. Meanwhile Godzilla reawakens and tramples across the land, heading straight for the big egg. Can Mothra save her offspring from Godzilla? Will Japan survive this epic monster battle?

Ghidorah, the Three-Headed Monster — A prophetess from Venus foretells cataclysmic disasters! Godzilla, Mothra and Rodan reappear in Japan, wreaking havoc! A giant meteor crashes into the mountains and the three-headed, fire-spitting space dragon King Ghidorah emerges! As the Venusian’s prophecies come true, assassins from a tiny Asian kingdom hunt her down, while the Earth monsters must decide whether to settle their petty differences and join forces against the extraterrestrial enemy!

Invasion of Astro-Monster/Godzilla vs. Monster Zero — Aliens from Planet X borrow our monsters for a little extermination project, but they’ve got something else up their sleeves: world domination! Using mind-control technology, these vinyl-and-sunglasses wearing spacemen turn Godzilla, Rodan and King Ghidorah loose in Japan, demanding Earth’s surrender! It’s up to American astronaut F. Glenn, his galaxy-trotting buddy Fuji, and nerdy inventor Tetsuo to break the aliens’ hold on the monsters and save our planet from certain doom.

Evil spacemen from the Black Hole are plotting to flatten Tokyo and build their own utopian city. Aided by deranged scientist Dr. Mafune, the aliens unleash a rebuilt Mechagodzilla and the monster Titanosaurus to do their evil bidding, until Godzilla surfaces to defend his homeland and the earth-shattering destruction begins. Mothra vs. Godzilla

More visually splendid and imaginatively written than the other Godzilla sequels, this (the fourth in the series) starts when Mothra’s gigantic egg washes ashore in Japan, having been dislodged from Mothra Island by a hurricane. Two tiny twin girls (sometimes singing like dual-diminutive Dorothy Lamours) from the island come to plead for the return of the egg by the greedy business guys who bought it for a tourist attraction, but to no avail. Radiation from nuclear testing revives Godzilla from the earth, who proceeds to threaten the egg and the cities, unless Mothra and his larvae hatched from the egg can stop him. The battle sequences between Mothra and Godzilla, and between Godzilla and the larvae, are spectacularly vivid and colorful. —Jim Gay

In 1974, Inoshiro Honda, the original and best Godzilla director, returned after a five-year absence to direct this 20th-anniversary commemoration to Gojira (the original Japanese name for Godzilla, before the West Anglicized it). This is the fifteenth film in the Godzilla series, and the eleventh by director Honda. Yet again the aliens (from the third planet of the black hole, whatever that means; they don’t really provide directions) stage a takeover of Earth, this time with the aid of Mechagodzilla and Titanosaurus (they’re just what they sound like). They owe the mad scientist Mafuni for the use of Titanosaurus, who in turn owes the aliens for resurrecting his daughter, Katsura, badly hurt in an accident, albeit now as a cyborg with the ability to control their two mecha-monsters. It shapes up as the fight of the century when Godzilla is pressed into service for our side. The battling behemoths afford the most dramatic and vivid fight scenes in all of Godzilladom in this one. Let’s hope the aliens don’t win; they’re so smug. —Jim Gay