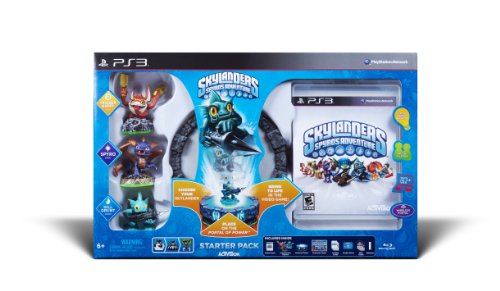 As a teaser for some more detailed Skylanders Spyro’s Adventure news that we will be bringing you next week during E3, Activision has released some character vignettes, which tell us a little more about the characters that are set to feature in the game’s starter pack. Skylanders Spyro’s adventure involves real life toys, which players will have to place on the Portal of Power to bring them into the game. The three toy characters that come in the starter pack are: Spyro, Gill Grunt and Trigger Happy. We have some information and some short clips where players can see all three characters in action.

Skylanders Spyro’s Adventure is an Action-Adventure game spin-off from the Spyro series designed for younger players that unlocks a whole new game universe while incorporating a unique gameplay mechanic utilizing more than 30 physical action figures that synch with consoles, creating a controllable in-game representation of that figure. The first release in the Skylander series, Skylanders Spyro’s Adventure Starter Pack contains three action figures, an exclusive game peripheral as well as other items. Action figures are compatible with all versions of the game. The game features co-op and competitive multiplayer, mini-games and more. 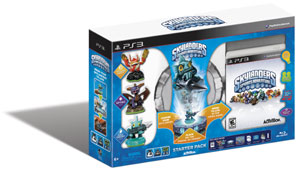 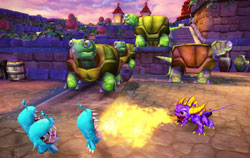 An all new game universe that includes Spyro.
View larger.

For generations, the Skylanders — a diverse group of mythical creatures, each with their own powers, personality and tendencies — have used their magical powers, weapons and levelable battle skills to protect their homeland, the Skylands. But now, an evil tyrant with the powers of a portal master has frozen and banished them to Earth. Only you, a portal master yourself, can physically put Skylanders on the Portal of Power — a conduit between this world and theirs — and bring them back to life in their world where they can battle to save Skylands forever.

Skylanders are special physical action figures that come to life in-game. Just take a Skylander, place it on the included Portal of Power, which is synched to your game console and a representation of your chosen Skylander will come to life in the video game and do your bidding. There are over 30 Skylanders in total – each with unique abilities and powers (three are included in your starter pack). Skylander action figures remember their in-game experiences and upgrades as they explore the mysterious world of Skylands, battle menacing creatures and collect treasures. Conveniently, it doesn’t matter what gaming system your friends have at their house, the Skylanders work on and across all major video game systems. That means that you can take your Skylanders over to your friend’s house, drop them on their Portal of Power and your Skylanders will come to life in the game.

Does your site have a contact page? I’m having trouble locating it but, I’d like to shoot you an email. I’ve got some suggestions for your blog you might be interested in hearing. Either way, great site and I look forward to seeing it develop over time.