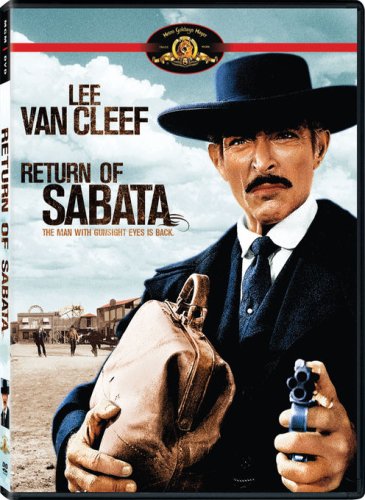 Lee Van Cleef returns to the title role in the third and final film in the “Sabata” trilogy. Working as a trick shooter in a travelling circus, Sabata arrives in a small town where he goes up against a wealthy land baron who taxes the locals and then fleeces them out of their money. With Giampiero Albertini, Reiner Schone, Ignazio Spalla. 106 min. Widescreen (Enhanced); Soundtracks: English Dolby Digital mono, French Dolby Digital mono; Subtitles: English, French.Return of Sabata, producer Alberto Grimaldi and director Frank Kramer’s (real name Gianfranco Parolini) third and final film about the adventures of the enigmatic, steely-eyed gunman of that name, is both the strangest of the three and arguably the one that most embodies the spaghetti Western aesthetic. Lee Van Cleef is back in the title role (Yul Brynner had stepped in for Adios, Sabata, the middle installment). So is essentially the same story formula (Sabata and his sidekicks take on the greedy villain who’s extorting tax money from the good citizens of Hobsonville, with double-crosses the most common currency), as well as several of the actors (in different roles here) from the first two films; the white guy who works both with and against our hero, a staple of the series, is played this time by Reiner Schone, who’s appealing in a Luke Wilson kind of way. But like Van Cleef’s new hairpiece, his return is not all good. The stoic, silent-but-deadly mystery man of before is now a veritable nattering nabob, with a heretofore unseen interest in the fair sex; nothing wrong with that, but the lighter, frothier Sabata certainly takes some getting used to. So does the surprising lack of fancy gunplay relative to the first two, not to mention the terrible dialogue dubbing that plagued the 1969 original. What’s more, producer Grimaldi’s association with the Italian master Federico Fellini (he produced Fellini Satyricon) is on full display, starting with a surreal opening sequence that finds Sabata working in a carnival sideshow. The music, too, is absolutely nutty, establishing some sort of spaghetti Western benchmark with a mix that includes J.S. Bach-like organ workouts, acid rock, and a laughably insipid title tune of the sort normally heard on a very bad sit-com. If all of this sounds entertaining, well, for the most part it is, but Return of Sabata is a mighty peculiar way to bring the saga to a close. The DVD contains no bonus features. –Sam Graham