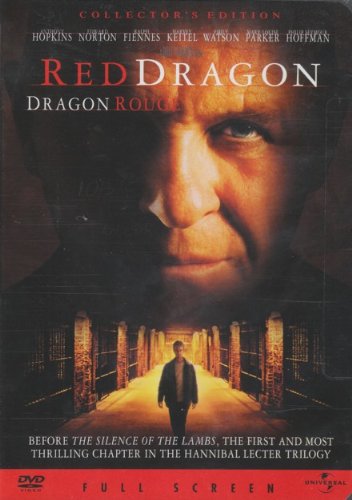 FBI AGENT WILL GRAHAM HAS BEEN CALLED OUT OF EARLY RETIREMENT TOCATCH A SERIAL KILLER, KNOWN BY AUTHORITIES AS THE TOOTHFAIRY. HE ASKS FOR THE HELP OF HIS ARCH-NEMESIS, DR. HANNIBAL THE CANNIBAL LECTER.THE ONLY PROBLEM IS THAT THE TOOTH FAIRYIS GETTING INSIDE INFORMATION FROM LECTORA lot could’ve gone wrong in Red Dragon, but the movie exceeds expectations. Replacing the acclaimed Manhunter as an “official” entry in the Hannibal Lecter trilogy, this topnotch thriller–the second adaptation of Thomas Harris’s first Lecter novel–returns to the fertile soil of The Silence of the Lambs, serving as both prequel and heir to the legacy of Lecter as portrayed, with mischievous menace, by the great Anthony Hopkins. Familiar faces and locations reappear (along with Lambs screenwriter Ted Tally) as Lecter coaches FBI profiler Will Graham (Edward Norton) in tracking the horrific “Tooth Fairy” killer (Ralph Fiennes), whose transformative killing spree is inspired by a William Blake painting. By dutifully serving Harris’s potent material, Tally and director Brett Ratner craft a suspenseful film worthy of its predecessors, bringing Hopkins full circle as one of the cinema’s all-time greatest villains. With overtones of Psycho and a superb supporting cast, Red Dragon succeeds against considerable odds. –Jeff Shannon