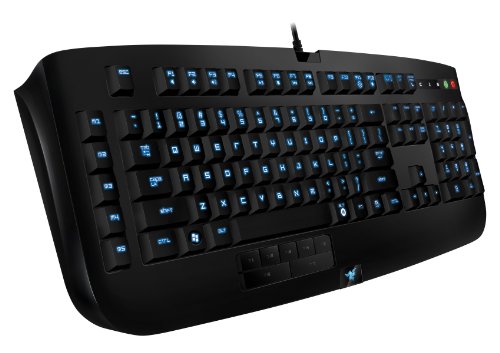 Designed and engineered especially for the MMO gamer, the Razer Anansi is the world’s first keyboard that raises your level of gameplay by giving you the power to instantly use up to 7x more commands and abilities over the current ?12 ability keys you now have. Its seven thumb modifier keys located below the space bar allow you to actuate every possible combination of modifier key (shift, ctrl, alt) in total accuracy and comfort using a single key stroke, exponentially expanding the repertoire of spells, abilities and macros you have at your command. From the casual MMO gamer to the serious hardcore raider, the Razer Anansi will take you to the head of the pack in both PVE and PVP action. Combine it with the Razer Naga MMOG mouse to use the Razer Anansi’s 7 thumb modifier keys seamlessly with the 12-button mouse keypad, giving you an unprecedented level of battle control while dual-wielding the world’s most phenomenal weapons for dragon slaying dominance.