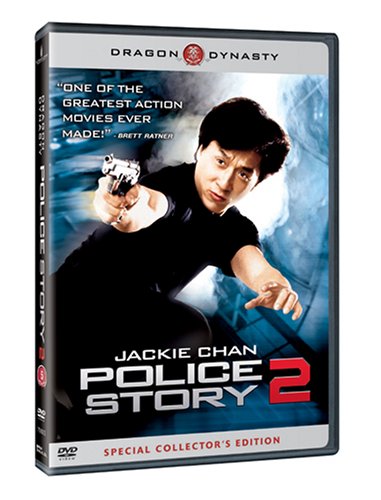 (Martial Arts/Foreign) The explosive sequel to Jackie Chan’s groundbreaking original, Police Story 2 is famous internationally for some of the most daring and inventive stunt sequences ever committed to film. Despite his success at apprehending criminals, Kevin Chan’s unorthadox approach to his work as a police officer sees him demoted to the traffic branch. Despite this, the man he put behind bars is now out of prison, and has vowed to make his life a misery.Before making a name for himself in Hollywood with the Rush Hour franchise, Jackie Chan was already an international superstar, thanks to Hong Kong films such as Police Story and its sequels. While not quite up to par with that film, Police Story 2 (released in 1988) still manages to pack quite the punch, picking up where Police Story left off. Chan’s Ka Kui has been demoted from detective to traffic cop, something that depresses him but is a source of relief for his gorgeous girlfriend May (Maggie Cheung, Hero), who is hoping that they can live in peace. But hell hath no fury like a Triad member scorned, and Ka Kui finds himself a hunted man when the gangsters he locked away seek revenge. While the plot is familiar, the impeccably choreographed action sequences are a work of art. Exhibiting both strength and grace, Chan who also directed and co-wrote the screenplay as well as performed all his own stunts) is both heroic and comical as he fends off hordes of villains. He’s in fine form, whether he’s beating up his opponent or about to get bullied by a waif of a handicapped man. Chan is famous for including a blooper reel at the end of his movies, and while the bloopers for his later films appear almost forced–as if he had to scrounge around to come up with good material–his earlier pictures conclude with gasp-inducing mistakes that make the viewer wonder how one man’s body can endure this kind of physical punishment. The DVD offers both the Cantonese version with English (and Spanish) subtitles, as well as a cheesy English dubbed treatment. Opt for the subtitles: The action will more than speak for itself. –Jae-Ha Kim