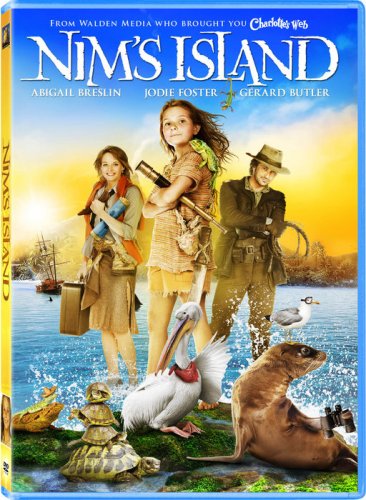 Nim Rusoe (Abigail Breslin) lives on a deserted island with her scientist father Jack (Gerard Butler) and her best friends: Selkie, a sea lion; Fred, a bearded dragon lizard; and Galileo, a plucky pelican. But when Jack goes missing at sea and the island is “invaded,” Nim reaches out via e-mail to the adventurous author (Jodie Foster) of her favorite books, and together, each discovers what it takes to truly become the hero of your own life story.Adventure doesn’t always begin with pirates on the high seas or explorers deep in the desert; sometimes it starts with an idyllic life on a private island in the middle of the South Asiatic Sea. For 11-year old Nim (Abigail Breslin) and her father and microbiologist Jack Russo (Gerard Butler), life is perfect thanks to their love of nature, Jack’s mechanical ingenuity, and regular deliveries via supply ship. Loneliness is never an issue for Nim because of her special friendships with Selkie the sea lion, Galileo the pelican, and Freddie the iguana and her education is intensive, if rather unique. Adventure and imagination are ways of life for Nim whether she’s heading out to sea to help her father collect plankton specimens, playing soccer on the beach with Selkie, or delving into the latest Alex Rover adventure novel, but everything changes when Jack departs on the boat for a two-night expedition to collect plankton specimens and gets caught in an unexpected storm. Alone on the island, Nim begins to worry about her father’s safety as well as her own and, through a chance email, connects with Alex Rover (Jodie Foster) whom she begs to come help find her father. Problem is, author Alexandra Rover is an unbalanced big city shut-in who’s afraid to leave her townhouse, not the fearless adventure hero portrayed in her books. Nim, Alexandra, and Jack embark upon the adventures of a lifetime in which each must overcome his or her own fears and perceived powerlessness and limitations in order to grow and help one another. The question is; can each prevail against his or her own insecurities and the fury of nature? Based on the novel Nim’s Island by Wendy Orr, Nim’s Island is first and foremost a captivating adventure full of suspense and peril which also offers a touching look at the love between a father and daughter. (Ages 7 and older) –Tami Horiuchi

Beyond Nim’s Island on DVD