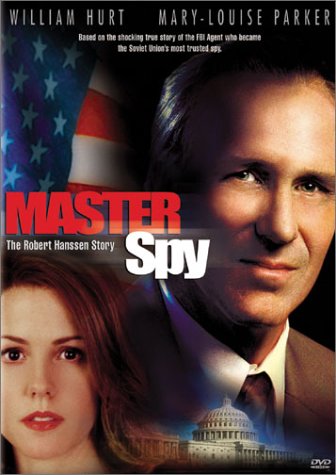 The very subject of spying provokes a perverse response: part revulsion, part riveted fascination. So does this spellbinding docu-drama about the tortured life led and lies told by Robert Hanssen, the FBI special agent who sold secret government documents to KGB officers. Literary legend Norman Mailer wrote a highly literate script for the all-star cast (including William Hurt, Ron Silver and Peter Boyle) that brings Hanssen, his colleagues and family members convincingly to life. Shot on location in Moscow, Hong Kong, Hawaii and Washington, DC, all adding authenticity to this disturbing account. 3 hours 20 min. on 1 DVD.Here’s a different kind of spy: awkward, frosty, supremely intelligent, deeply religious. As brilliantly acted by a perfectly cast William Hurt, this is Robert Hanssen, a respected FBI man who sold information to the Soviets for 20 years. In Norman Mailer’s incisive script for this TV movie, Hanssen turns to spying for his own neurotic reasons: to out-earn his domineering father, to show up the FBI bosses who continually pass him over, and maybe to dispel the boredom of the arrogant. A kinky interest in voyeurism and a platonic friendship with a stripper are also part of the mix (which brings in nudity not part of the broadcast version). The stripper is played by the touching Hilit Pace, while Mary Louise Parker is fine as Hanssen’s clueless wife. Production values are TV-utilitarian, but Mailer’s keen psychological probing and Hurt’s unwavering chilliness make Master Spy an absorbing experience. –Robert Horton