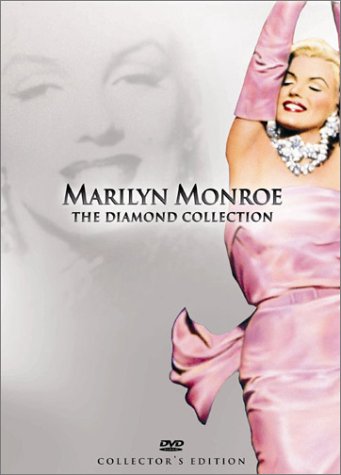 Marilyn in her billowy white skirt and the scene that made her a legend. Co-starring Tom Ewell. “There’s No Business Like Show Business” (1954, 117 min.) – A glamorous tale about the trials and tribulations of a veteran vaudeville family. Co-starring Ethel Merman and Donald O’Connor. “How to Marry a Millionaire” (1953, 95 min.) – Discover Marilyn’s phenomenal comic talent as she leads an outrageous man-hunting scheme in this classic comedy. Co-starring Betty Grable and Lauren Bacall. “Gentlemen Prefer Blondes” (1953, 91 min.) – Marilyn is sensational, performing the timeless hit “Diamonds are a Girl’s Best Friend.” Co-starring Jane Russell. Also includes the acclaimed documentary “Marilyn Monroe: The Final Days,” available only in this box set, plus forty minutes of exclusive, never-before-seen footage from Marilyn’s never-completed final film, “Something’s Got to Give.”The Diamond Collection consists of five Marilyn Monroe films plus the documentary The Final Days. Bus Stop (1956) stars Monroe as a singer who finds herself trapped at a bus stop in the middle of nowhere during a blizzard. How to Marry a Millionaire (1953) was built around a trio of female stars, Monroe, Lauren Bacall, and Betty Grable, who play friends who come up with a plan to find and marry rich men. Monroe plays an ambitious showgirl in 1954’s There’s No Business Like Show Business, which brings together two giants of Broadway, Ethel Merman and Irving Berlin, to celebrate the glories that were vaudeville. Howard Hawks’s 1953 musical Gentlemen Prefer Blondes stars Monroe and Jane Russell as friends who go to Paris looking for mates. The film is charged by Hawks’s stylish snap, a famous set piece or two (including Monroe descending that staircase while singing “Diamonds Are a Girl’s Best Friend”), Russell’s wit, and songs by Leo Robin and Jule Styne. The Seven Year Itch (1955) is a memorable laugh machine. As a married man left alone during a hot summer, Tom Ewell shows off crack timing matched by Monroe’s zesty comic flair, and the scene in which her white dress is blown skyward by a passing subway train has entered the encyclopedia of great movie images.

In The Final Days, producer-director Patty Ivins chronicles Monroe’s final, aborted feature film, Something’s Got to Give, which was ultimately shut down after the star was dismissed from the production. Beyond Monroe’s fragile emotional and physical health, this well-crafted profile examines the financial crisis facing her studio as well as the mounting frustration of meticulous director George Cukor and his cast, including costar Dean Martin, as Monroe’s absences drove the shoot over budget. The documentary concludes with a 40-minute reconstruction of footage completed for the feature, which would subsequently be reshot as a vehicle for Doris Day and James Garner, Move Over, Darling.