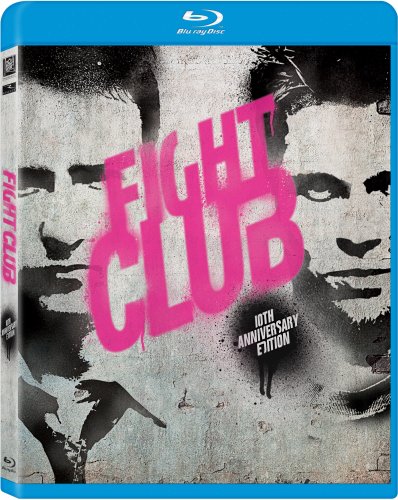 “‘Fight Club’ pulls you in, challenges your prejudices, rocks your world and leaves you laughing” (Rolling Stone). Brad Pitt (“12 Monkeys”, “Seven”), Edward Norton (“Primal Fear,” “American History X”) and Helena Bonham Carter (“Mighty Aphrodite,” “A Room With A View”) turn in powerful “performances of which movie legends are made” (Chicago Tribune) in this action-packed hit.

A ticking-time-bomb insomniac (Norton) and a slippery soap salesman (Pitt) channel primal male aggression into a shocking new form of therapy. Their concept catches on, with underground “fight clubs” forming in every town, until a sensuous eccentric (Bonham Carter) gets in the way and ignites an out-of control spiral toward oblivion.All films take a certain suspension of disbelief. Fight Club takes perhaps more than others, but if you’re willing to let yourself get caught up in the anarchy, this film, based on the novel by Chuck Palahniuk, is a modern-day morality play warning of the decay of society. Edward Norton is the unnamed protagonist, a man going through life on cruise control, feeling nothing. To fill his hours, he begins attending support groups and 12-step meetings. True, he isn’t actually afflicted with the problems, but he finds solace in the groups. This is destroyed, however, when he meets Marla (Helena Bonham Carter), also faking her way through groups. Spiraling back into insomnia, Norton finds his life is changed once again, by a chance encounter with Tyler Durden (Brad Pitt), whose forthright style and no-nonsense way of taking what he wants appeal to our narrator. Tyler and the protagonist find a new way to feel release: they fight. They fight each other, and then as others are attracted to their ways, they fight the men who come to join their newly formed Fight Club. Marla begins a destructive affair with Tyler, and things fly out of control, as Fight Club grows into a nationwide fascist group that escapes the protagonist’s control.

Fight Club, directed by David Fincher (Seven), is not for the faint of heart; the violence is no holds barred. But the film is captivating and beautifully shot, with some thought-provoking ideas. Pitt and Norton are an unbeatable duo, and the film has some surprisingly humorous moments. The film leaves you with a sense of profound discomfort and a desire to see it again, if for no other reason than to just to take it all in. –Jenny Brown