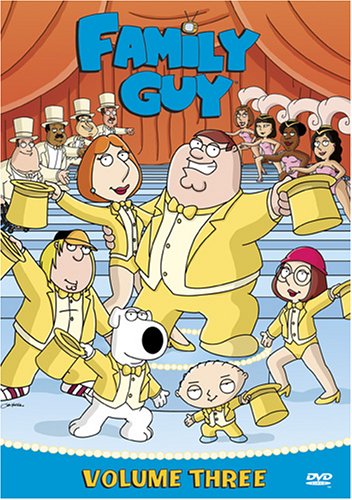 Fans will have to wait no longer for the next Volume of Family Guy on DVD! The hilarious first part of Emmy nominated Season 4 will have you laughing like you’ve never laughed before. Edgier and more irreverant than ever, you’ll forget you’ve ever heard the term “Politically Correct!” The must-have DVD of the season — any self-respecting guy will own Family Guy Volume 3 on November 29th.Family Guy lives! That’s great news for the devoted fans who watched in record numbers the reruns on Cartoon Network and made the Family Guy DVDs bestsellers. It’s bad news for Mel Gibson, Christina Aguilera, Justin Timberlake, Jimmy Fallon, Rob Schneider, Skeet Ulrich, Corey Haim, My Two Dads, and other pop-culture detritus this show’s writers take infinite delight in kicking when they’re down (or up, for that matter). The long, long, awaited fourth season begins with a bravado broadside at Fox, which canceled Family Guy in 2002. Peter Griffin (voiced by series creator Seth MacFarlane) recites a litany of 29 doomed replacement shows beginning with Dark Angel and ending with Greg the Bunny. From there, it’s like the Griffins never left. The 13 episodes are just as dense with bodily function jokes, surreal nonsense, gratuitous pop-culture references (the more obscure, the better), and edgier gags that recklessly cross the line on any number of levels (“Maybe I was wrong about you,” Jodie Foster says to John Hinckley in the episode, “Model Misbehavior.” “Maybe I was wrong about all men.”).

The new season rewards longtime viewers with appearances by such series icons as the Greased-Up Deaf Guy and the Evil Monkey in Chris’s closet, and makes no concessions to newcomers to the show (who will no doubt be scratching their heads over the more than two-and-a-half-minute digression in “Blind Ambition,” in which Peter’s nemesis, the Giant Chicken, returns to continue the smackdown that started in the season 2 episode “Da Boom.” In “World Domination: The Family Guy Phenomenon,” one of the bonus features included on this three-disc set, MacFarlane proclaims these new shows to be “the best we’ve done.” A bold claim, but often enough, one is laughing too hard to prove otherwise. One minute, Family Guy dazzles with inspired animation (In “Breaking Out Is Hard to Do,” Chris reaches for a carton of milk at the supermarket and finds himself pulled in to A-ha’s classic music video, “Take on Me”). The next, it’s wallowing in vomit (“8 Simple Rules for Buying My Teenage Daughter”). In addition to the freewheeling episode commentaries, this set also includes a great bonus, excerpts of cast “table reads” of two episodes. Back to the “World Domination” featurette. MacFarlane states, “It’s the first time since we’ve been doing (the show) that I think it’s safe to say that we’re here to stay for awhile.” Are you listening, Fox? –Donald Liebenson