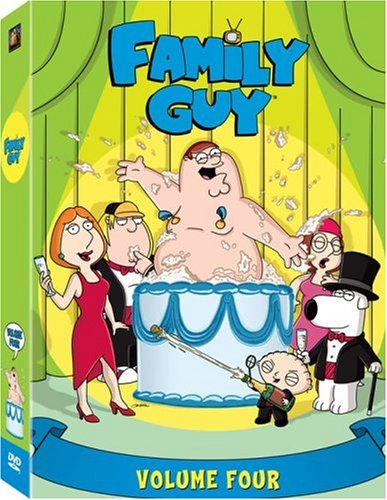 Fasten your sofa belts for another fiendishly futile attempt at world domination for Stewie-and a diaper full of fun for “Family Guy” fans around the globe! Boasting laughs as big as Peter’s waistline, these 14 hilarious episodes from Season Four find television’s most outrageous animated family in all sorts of comically compromising situations. Don’t miss out on this Fox TV DVD best seller–a 3 disc set available for $39.98 & $54.98.Okay, let’s get one thing straight right off the bat: Family Guy is not, never has been, and never will be, The Simpsons. Nor is it South Park, King of the Hill, or any one of a number of other shows on Adult Swim. But yes, it is in many ways a rip-off of those other shows (especially The Simpsons; let’s not even pretend otherwise). But so what? By now, you either think the show’s funny, or you don’t, and the derivativeness either bothers you, or it doesn’t. Volume 4 is likely to just cement your feelings one way or the other, because this collection features some of the funniest, and the most offensive material yet. It’s also the most cohesive. The show has always been incredibly erratic, turning on a dime to fit in all those jokes from out of the blue that start with Peter saying “Boy, this is worse than that time when…” But by now, the writers and series creator/executive producer Seth MacFarlane have figured out how to more seamlessly integrate them into the show, and that’s just what it needed to really come together. In fact, the extra attention being paid to the show recently in the form of swipes from The Simpsons and especially South Park (which dedicated an entire episode to trying to kill off Family Guy) is evidence that this is probably the peak for the series. This volume is 14 episodes, and stand-outs include “The Courtship of Stewie’s Father,” which gives more face time to creepy old man Herbert (brilliantly voiced by Mike Henry), and “The Father, the Son, and the Holy Fonz,” in which Peter starts his own church dedicated to Fonzie from Happy Days. Of course, there is still the lingering question of who the real star of Family Guy is: Peter or Stewie? The little football-head gets his moments to shine in “Sibling Rivalry,” in which he battles with half-brother Bertram, and… well, pretty much every other episode, as he continues to get many of the memorable lines. Along with the extra features, over 40 deleted scenes, extensive commentaries, and featurettes, you true fans will get more than your share of laughs from this collection, which is what you watch the show for in the first place. –Daniel Vancini