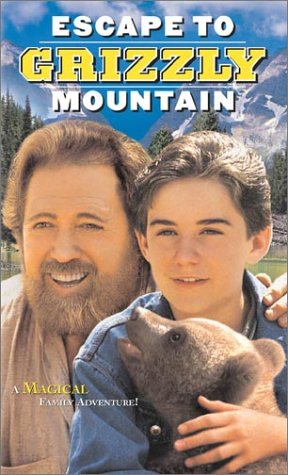 A boy trying to free a bear cub from its cruel circus owners enlists the help of a real mountain man (Dan Haggerty, “The Life and Times of Grizzly Adams”) in this wonderful adventure for all ages. Heroes can come from any time…but heroism is timeless. A rugged adventure set in the splendor of the Pacific Northwest, “Escape to Grizzly Mountain” follows a brave boy back through time in a race to save one of Earth’s cutest and most lovable creatures! Starring Dan Haggerty (“The Life and Times of Grizzly Adams”) and Jan Michael Vincent (“Airwolf”), this delightful bear tale is a heartwarming film for all ages!As the disclaimer states, this movie may feature Grizzly Adams himself, Dan Haggerty, but it’s not about Grizzly Adams. Instead, it’s a charming story of a boy moved by the plight of an abused cub kept by an unscrupulous circus. From a Native American trainer troubled by his own collaboration with the enemy, the boy learns of a mystical cave where “the pure of heart” can travel back to a simpler past. He aims to free the bear into the 1841 wilderness, but the cub escapes his leash and the boy meets Haggerty’s mountain man alone. Of course, Haggerty agrees to come to the future to set things right. Ninety minutes later, after many scraps with circus villains, the law, and a neighborhood bully, all is well with the good guys, both human and ursine. While the story is a bit cloying at times, it’s also funny, good-intentioned family viewing for ages 5 and up. –Kimberly Heinrichs