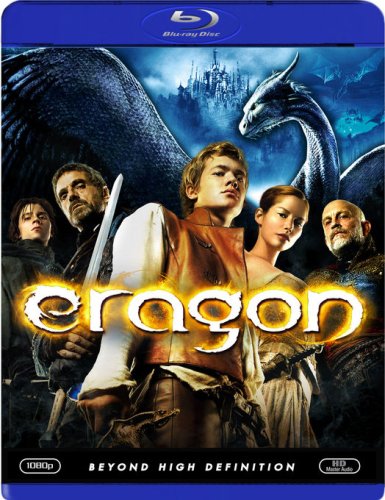 In his homeland of Alagaesia, a farm boy happens upon a dragon’s egg — a discovery that leads him on a predestined journey where he realized he’s the one person who can defend his home against an evil king.

While it owes much of its appeal and appearance to the Lord of the Rings trilogy, Eragon can stand on its own as an enjoyable fantasy for younger viewers. Faithfully adapted from the bestselling novel by teenage author Christopher Paolini, this boy-and-his-dragon tale offers clean, fast-paced family entertainment without compromising the darker qualities of Paolini’s novel (the first in what is known as the “Inheritance” trilogy). The plot centers on 17-year-old peasant farmboy Eragon (played by appealing newcomer Ed Speleers) who discovers a mysterious blue object that turns out to be an egg that eventually hatches to reveal Saphira, a blue-scaled dragon that quickly grows to full-size. According to prophecy, Eragon is destined to be a dragon-rider like those who once protected a benevolent kingdom, thus reviving an ancient conflict against the army of King Galbatorix (John Malkovich), a former dragon rider who turned to evil, now in alliance with a! dark-magic “Shade” sorcerer named Durza (Robert Carlyle). While the movie serves up familiar fantasy elements and offers little if anything new to fans of the genre (or anyone who’s read the books of Anne McCaffrey and Ursula K. Le Guin), it’s visually impressive (especially the dragon scenes, with Rachel Weisz providing the telepathic “voice” of Saphira) and full of timeless wisdom, much of it delivered by Eragon’s heroic mentor Brom (Jeremy Irons), himself a former dragon rider with memories of past battles and hope for Eragon’s future. Add a fair warrior-maiden named Arya (Sienna Guillory) and you’ve got all the ingredients for a worthwhile (if not particularly original) fantasy that points directly to a sequel. Whether that’s a good or a bad thing is up to individual viewers to decide. —Jeff Shannon