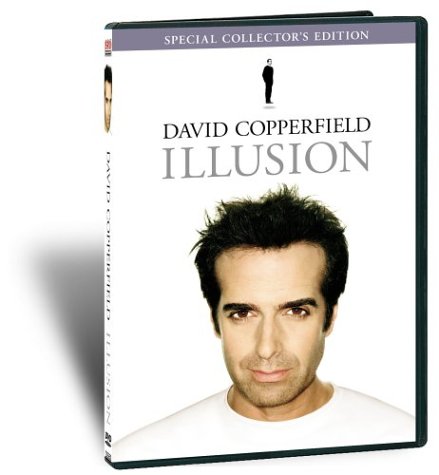 David Copperfield – the performer the NYT calls “Our Era’s Giant of Magic” brings you two decades of his spellbinding career. The Master of Illusion takes you on a guided tour of his magic and his mind. Witness the epic illusions that redefined his art; The Disappearance of the Statue of Liberty, Walking Through the Great Wall of China, The Imploding Building, The Vanishing Airplane, and much more. Included are illusions featured in his Broadway show “Dreams and Nightmares” and Flying, the signature effect that took him seven years to develop.In the magical realm of David Copperfield’s Illusion, seemingly anything is possible. Essentially a “greatest hits” compilation of jaw-dropping illusions from Copperfield’s 20-year legacy of highly rated CBS TV specials, this delightful DVD is guaranteed to entertain even the most skeptical critic of Copperfield’s glitzy, Vegas-styled stage shows. The master magician is open to ridicule with his GQ looks, Versace wardrobe, atrociously dated hairstyles, and flamboyant posing, but he’s the first to admit it, and his crowd-pleasing showmanship is merely the entertaining warm-up for a magic show unparalleled in the history of illusion arts. Featuring Copperfield’s former fiancée Claudia Schiffer as a reporter who interviews Copperfield about his life and career, the CBS special 15 Years of Magic provides the bulk of this program, along with a variety of additional tricks and sleight-of-hand mastery.

The best-known illusions are all here (e.g., disappearance of the Statue of Liberty, walking through the Great Wall of China, the imploding building, the vanishing airplane), along with glimpses of artifacts (further detailed in the bonus features) from Copperfield’s extensive, one-of-a-kind museum of magic tricks, automatons, and precious historical documents. And while Copperfield’s commentary track necessarily avoids any explanation of how his illusions work, he gives generous credit to other illusionists who contributed their copyrighted work to these shows while explaining the logistical circumstances surrounding each illusion. He’s also self-deprecating despite an obviously healthy ego, and the clip from Late Night with Conan O’Brien–in which a faux Copperfield performs ridiculous non-tricks on the streets of Manhattan–is a real hoot. Of course, any cynic could dismiss Copperfield’s work as the product of precision engineering and rigorous rehearsal, but one simple fact remains: Not a single one of his marvelously staged illusions fails to delight and astonish. It’s no mistake that the song “Young at Heart” is prominently featured; Copperfield invites us to embrace a childlike sense of wonder, making us partners in the act of defying everyday reality. Simply put, it’s pure magic. –Jeff Shannon