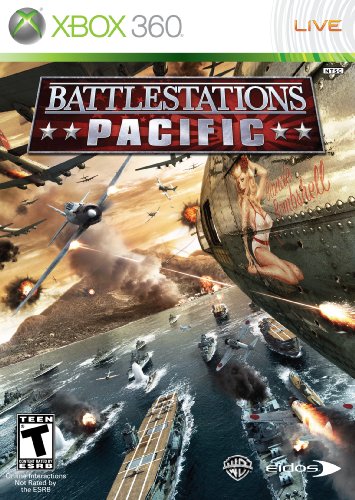 BattleStations: Pacific is the immense sequel to the critically acclaimed Battlestations: Midway. The innovative franchise returns to complete the entire Pacific War with two massive single-player campaigns, the historically based US campaign and a historically possible Japanese campaign. Players will experience one war through two epic sagas to be a part of history or change it. Commanding the US Fleet, players relive the grandest and most critical naval battles of the Pacific War and for the first time, as the Japanese, players lead the IJN Fleet to a completely different ending to the war. No other game delivers the challenge of an RTS with the rush of real-time WWII flight and naval warfare. Players need intelligence and expertise to plan their moves in order to remain one step ahead of the opponent. The players command both strategy and action to anticipate every opponent move and turn the tide of war. Twice the size of the original the sequel includes 28 major battles, 100 units including 21 new units, five new innovative multi-player modes across eight new multi-player maps, and new features which include island capture, kamikaze attacks, and an improved easy-to-use interface.As the sequel to the critically acclaimed Battlestations: Midway, Battlestations: Pacific for the Xbox 360 takes war-play to the next generation by introducing a new level of realism with more detailed graphics, a redesigned interface for better game play, and new features that will make you feel like you’re part of the Pacific War. Eidos Interactive designed this epic action-strategy game to have 28 full-scale battles, with over 100 realistic war machines, all of which allows you to relive the historical battles of the Pacific during WWII. Play as the American forces, or go the “what if” route, and play as the Japanese to rewrite the history books.
.caption { font-family: Verdana, Helvetica neue, Arial, serif; font-size: 10px; font-weight: bold; font-style: italic; } img.withlink {border:0px black solid;} a.nodecoration {text-decoration: none}

Realistic game play with Incredible Graphics,
Relive history, or rewrite it, with Battlestations: Pacific’s amazingly realistic game play that will make you feel as if you were there during these historical battles. The Cockpit View lets you go inside the cockpit of your favorite WWII fighters, dive bombers, torpedo planes, and more. And the Kamikaze attacks feature adds amazing realism to this game.

Battlestations: Pacific adds greater detail and depth of field than ever before. New plane and ship destruction effects add a touch of realism, as does the bullet tracers and smoke and fire effects that give this game an authenticity like no other. The battles take place in various weather conditions and during the day and night for added realism.

28 Epic Battles and Over 100 Authentic War Machines
Lead either the American or Japanese forces through a total of 28 epic battles on your way to victory and do so with over 100 authentic war machines, including fighters, carriers, destroyers, submarines, kamikaze planes, and more. Take to the air with 17 authentic US planes, such as the Corsair fighter or Curtis Helldivers, or 20 Japanese planes, including the Mitsubishi J2M Raiden (Thunderbolt) or the night-fighting Nakajima J1N1 Gekko.

Take control of the Pacific with the New York Class Battleships that feature twelve 14-inch guns mounted in six dual-turrets for considerable firepower against the enemy. Or battle the enemy from below the sea with the stealthy Narwhal Class Submarines that featured a deck-mounted, five-inch gun and six torpedo tubes used to fire torpedoes at enemy ships. You get plenty of other war machines at your disposal, so you can mount the perfect plan of attack against the enemy from air, sea, or even underwater.

Single Player or Multiplayer game play
You can choose to mount a single player campaign battling through 28 stages on your way to victory, or play along with 7 other people in an epic multiplayer battle (four on each side), and make your way through 96 online multiplayer battles. Multiplayer battles on Xbox Live will bring realistic game play to your Xbox 360 with incredibly large battles, the largest of which includes over 100 war machines.

As you make your way through 28 full-scale battles as the American forces in single player mode, you begin your campaign after Midway and battle your way through Guadalcanal, Leyte, Iwo Jima, Okinawa, and more. You can also rewrite history as the Japanese forces and begin your journey at Pearl Harbor and battle through Java Sea, Port Moresby, Midway, and beyond.

With a slew of new features and game play options, Battlestations: Pacific takes you back to the historic battles of the Pacific during WWII and does so with incredibly-realistic graphics, over 100 authentic war machines, and single or multiplayer gaming options that allow you to stage two unique campaigns as either the American or Japanese forces.