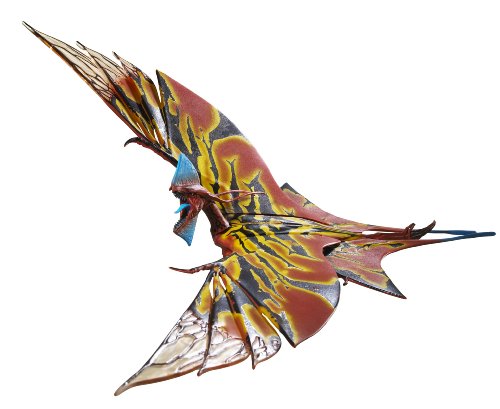 Boasting a 20-inch wingspan and featuring multiple points of articulation, the Leonopteryx creature figure will seat one action figure (not included). This works with most other 3 3/4″ – 4 1/4″ figures(sold separately). This figure is accompanied by a character-specific Level 4 webcam i-TAG and a display stand. Not a flying toy. This figure is a highly detailed replica of the creature from James Cameron’s 2009 film, Avatar. Measuring 24.4 meters in length with a 20-meter wingspan, the garishly-hued Leonopteryx, is among the most formidable of Pandora’s creatures, is a carnivore which primarily feeds upon the likes of Mountain and Forest Banshees. The Leonopteryx is armed with monstrous jaws, a razor-sharp fin, and immense talons. Jake Sully’s successful attempt to tame a Great Leonopteryx, earning him the mystic title of Toruk Makto, generates profound reverence among the Na’vi, helping to unite the latter against their human adversaries.

I love your web site.. very nice colors & theme. Did you create this internet site yourself or did you hire somebody to do it for you? Plz reply back as I’m looking to create my own blog and would like to know where u got this from. thanks